Home / valeblog / Back of Tateyama 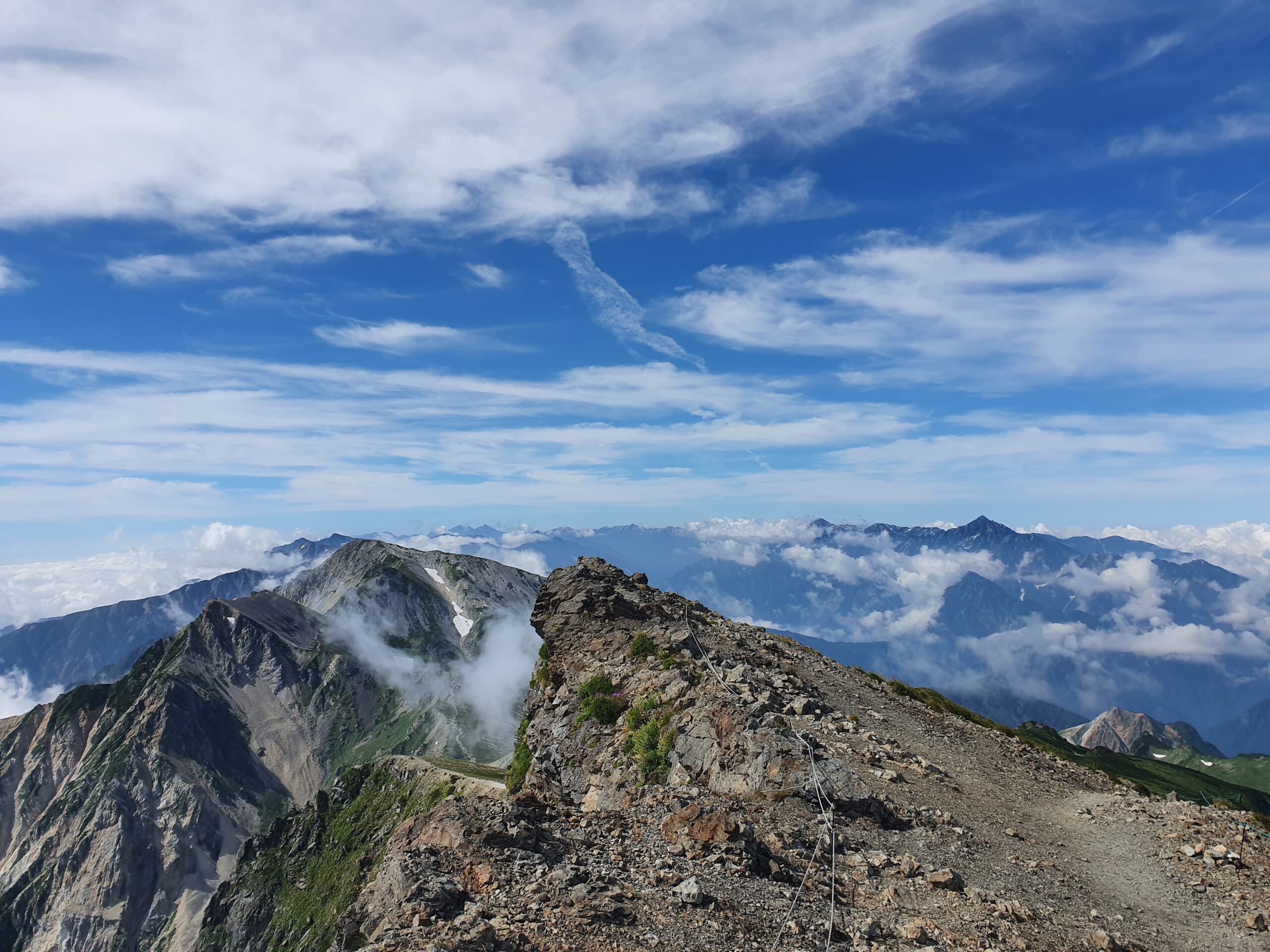 I was confused why the Ushiro-Tateyama mountain range (from Jiigatake to Mt Shirouma) is called what it is. It means “rear Tateyama” which is weird from my point of view: isn’t it in front of Tateyama? The name of course would come from the other (Toyama) side, but it still feels weird.

A while back I walked into a bookshop and I spotted a mountain magazine focusing on the so-called kiretto of the country. These are gaps in the mountain range, often very “deep” cols with pretty tough terrain. This magazine named three as the “big three” of Japan: the Hachimine col between Mt Kashima-yari and Mt Goryuu, the Kaerazu col between Mt Karamatsu and Mt Shirouma, and the “great” dai-kiretto between Mt Hotaka and Mt Yari.

Now if you open a map you’ll notice that two of these are in the Ushiro-Tateyama range. And while a year and a half ago when Yama no Susume mentioned the Yari-Hotaka kiretto my reaction was “yeah nope,” things changed and I decided to check out all three of these. These are said to be some of the toughest “common” trails, eg trails that are marked on maps as “generally traversable” (if dangerous). First I went on a four-day thru-hike of the Ushiro-Tateyama range.

The first day was probably the lightest. I started with the first train (shinkansen) from Tokyo, got on the bus to Ougizawa, which is on the “Alpen Route” up to the Kurobe Dam and Tateyama, but also the trailhead to Jiigatake. A little after 10am I hit the trail.

The climb was a well-maintained, comfortable trail. Of course as usual with mountains in Japan it was occasionally pretty steep, but that’s nothing new. The trail was going up the side of a valley, so between the trees I could spot the ridgeline up above. I was shocked when I saw the (Taneike) hut up on the ridge, and realized the trail will go all the way around there.

It took two hours to get to the hut, but other than one sketchy bit, the trail was safe and simple. As I was taking photos of the trail, I almost stepped on a family of ptarmigans (raichou) trotting across the trail. Their summer feathers blended in so well I almost didn’t notice them at all (and they weren’t much disturbed by humans either). I can’t get over how “cute” they look and yet they sound like a drunk man burping.

In another hour I was up on the top of Jiigatake, hopped across the central summit and followed the trail on to the Tsumetaike hut where I’d stay that night. The trail would even drop back a little under the treeline, giving me a taste of the lots of ups and downs waiting for me in the coming days. I rested well and hit the trail the next morning before 6am.

The weather was… well, ridgeline. On the Nagano side it was sunny, but the wind from the other side kept pushing up clouds on the mountain side, often blocking the view. As I climbed higher towards Mt Kashima-Yari, I entered the (realm of the) clouds. I checked both summits of the mountain before putting on my helmet and descending into the Hachimine kiretto.

The trail at first followed the rocky, skinny ridge then dropped steeply down. There were plenty of spots with chains fixed as aids, though they weren’t always needed. In only half an hour, I was across it at the Kiretto hut. Had a protein bar and moved on. The path up Mt Goryuu actually felt way tougher than the kiretto itself. The weather wasn’t getting any better (so I was still mostly in the clouds and the wind was unpleasant) nor the trail any easier. Steep rocky climbs and descents followed endlessly.

It was almost noon by the time I got my first glimpse of the Goryuu summit as the clouds started breaking up, and by then I was getting close to it too. I shed my shell as the wind was just the cooling I needed in the summer heat. Then after climbing over a few more rock blocks on the trail, I finally made it to the summit. It was a long day so I rested there before the descent to the hut for the night. I was sad to discover that my light gloves weren’t designed for this rocky terrain and got shredded pretty hard.

The “excitement” for the afternoon was that the slope below the hut featured a whole family of bears, two or three cubs and their presumably mother, just walking around. I watched the sun set behind some neighbor of Mt Tsurugi then passed out. In the morning I could see Mt Fuji in the distance as I was leaving as the sun was rising. First goal: Mt Karamatsu!

The ridge once again dropped below the treeline before going up pretty steep again. Once I reached the summit of Mt Karamatsu, it was helmet time again. The second kiretto is called Kaerazu-no-ken (不帰嶮), which is very ominous: it means “the steep place of no return.” (As for that, I know someone who trail ran across it.) It definitely wasn’t as dangerous as the name suggests. There was of course the steep, rocky climb up and down, but I never felt out of control. The really tough part was the long and steep climb back up the Tengu-no-Kashira on the other side.

Once back “up high,” the trail was all along the ridgeline (and well above the treeline), exposed to the never-ending strong wind. Even in the middle of August I had to keep on my shell all the way it was so unpleasant. But at least it was sunny and the views were amazing! There wasn’t much up or down to the hut for the night anymore, just quiet cruising. I was surprised that there were spots of snow even in the middle of summer, but considering the ridiculous amount of snowfall in the area, I guess it shouldn’t be surprising.

I got to the Tengu hut soon after noon, and as the weather deteriorated quickly, I spent the rest of the day just chilling inside. That didn’t change overnight either, and I started from within a cloud in the morning. It wasn’t until much higher up on the mountain that I finally got to see something other than gray mist.

I went on to pass the various “Hakuba” (Hakuba is another way to read Shirouma) peaks: Mt Hakuba-Yari, Mt Shakushi, Mt Shirouma itself, then Mt Korenge and many other unnamed. I passed the “big pond” Shirouma-Ooike, then kept hopping along the rocky path. I’d really like to go back in the winter and see how difficult that area is to walk when covered in snow, because having to walk on boulders for hours was quite a pain.

By the time I reached the top of the ski lift / gondola I was ready to go back to civilization and rest a little. I wasn’t going home though: the next day I’d be going back for one more 4-day round, this time traversing the third “great kiretto,” the one between Mt Yari and Mt Hotaka. But that afternoon I just washed my clothes and tried to recharge as much as possible. (Local hot springs and some craft beer was involved.)